The Power of Dots 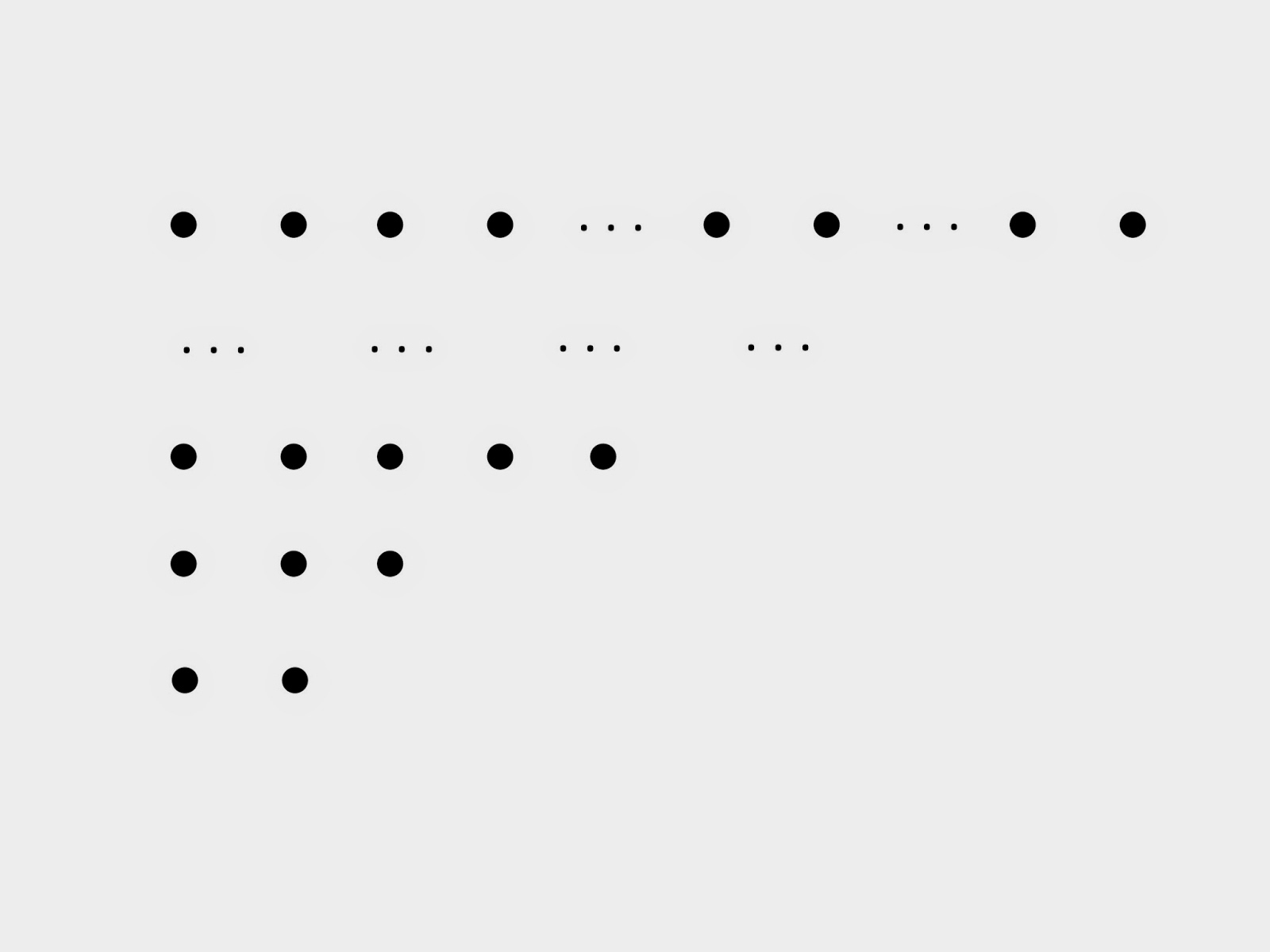 On June 29, the New York Times ran a story about the Common Core Mathematics Standards. If ever you wanted proof of the dismal mathematics education most Americans have been provided, you will find it in the story’s “human interest lede,” which described one mother’s response to seeing her daughter’s homework. By taking the daughter out of school to teach her herself “the old fashioned way” she herself had been subjected to, this well-meaning parent was ensuring that, as had clearly been the case for the mother, the daughter too would not be exposed to real mathematical thinking—the kind that in today’s world is a key to the most attractive jobs. Instead she would be subjected to the same, dreary, rote-skills-drills inflicted on previous generations—a process designed to train people for routine work in the pre-computer era, but so hopelessly inadequate for the 21st century that parents are un-equipped to figure out for themselves the simple (albeit unfamiliar) math homework their children are assigned.

Surely, if mathematics education should achieve one thing, it is develop the ability to figure things out for yourself. We’re not talking the Riemann Hypothesis here; the focus is basic school arithmetic, for heaven’s sake.

To continue with the Times article, arrays of dots seemed to figure large in this parent’s dislike of the Common Core. She felt it was pointless to spend time drawing and staring at arrays of dots.

True, it would be possible—and I am sure it happens—to generate tedious, and largely pointless, “busywork” exercises involving drawing arrays of dots. But the image of a Common Core math worksheet the Times chose to illustrate its story showed a very sensible, and deep use of dot diagrams, to understand structure in arithmetic. Much like the (extremely deep) dot array at the top of this article, which I’ll come to in a moment.

To the girl’s parent, mathematics is about numbers, but that’s just a surface feature. It’s really about structure. And throughout the ages, mathematicians have used the most simple symbols possible to bring out and understand that structure: namely, dots and lines.

The Times’ parent, so dismissive of time spent drawing and reflecting on dot diagrams, would, I am sure, think it a waste of time to devote any effort trying to make sense of the dot diagram I used to open this post. She would, I have no doubt, find it incomprehensible that an individual with a freshly-minted Ph.D. in mathematics would spend many months—at taxpayers’ expense—staring day-after-day at either that one diagram, or seemingly minor variations he would start each day by sketching out on a sheet of paper in front of him.

Well, I am that mathematician. That diagram helped me understand the framework that would be required to specify an infinite mathematical object of the third order of infinitude (aleph-2) by means of a family of infinite mathematical objects of the first order of infinitude (aleph-0). The top line of dots represents an increasing tower of objects that come together to form the desired aleph-2 object, and each of the lower lines of dots represent shorter towers of aleph-0 objects. In the 1970s, a number of us used those dot diagrams to solve mathematical problems that just a few years earlier had seemed impossible.

That particular kind of dot diagram was invented by a close senior colleague (and mentor) of mine, Professor Ronald Jensen, who called it a “morass.” He chose the name wisely, since the structure represented by those dots was extremely complex and intricate.

In contrast, the simple, rectangular array implicitly referred to in the New York Times article is used to help learners understand the much simpler (but still deep, and far more important to society) structure of numbers and the basic operations of arithmetic, as was well explained in a subsequent blog post by mathematics education specialist Christopher Danielson. The fact is, dot diagrams are powerful, for learners and world experts alike.

The problem facing parents (and many teachers) today, is that the present student generation is the one that, for the first time in history, is having to learn the mathematics the professionals use—what I and many other pros have started to call “mathematical thinking” in order to distinguish it from the procedural skills so important in past times.

The reason for that is that in the world today’s students will graduate into, computation is as plentiful as water or electricity. The smartphone we carry around with us is much faster, and more accurate, in carrying out mathematical procedures than any human.

In a single generation, society’s need for mathematical mastery has gone from procedural computation, to being able to make effective and reliable use of an effectively unlimited amount of automated computation. To put it bluntly, mastery of computational skills is no longer a marketable asset. The ability to make good use of computational power is where it’s at in math today.

For almost all the three thousand years of mathematical development, the focus in mathematics was calculation (numerical, symbolic, or geometric). Learning mathematics meant learning how to perform those calculations, which boiled down to achieving mastery of various procedures. Mastery of any one procedure could be achieved by rote learning—doing many examples, all essentially the same—leaving the only truly creative mental task that of recognition of which procedure to apply to solve which problem.

Numerical and symbolic calculation (arithmetic and algebra) are so simple and routine that we can program computers to do it for us. That is possible because calculation is essentially trivial. Perceiving and understanding structure, on the other hand, is something that (at least at the present time) requires human insight. It is not trivial and it is difficult. Dot diagrams can help us come to terms with that difficulty.

When movie director Gus Van Sant was faced with introducing the lead character, Will Hunting (played by Matt Damon) in the hit 1997 film Good Will Hunting, establishing in one shot that the hero was an uneducated (actually, self-educated) mathematical genius, the first encounter we had with Will showed him drawing a dot diagram on a blackboard in an MIT corridor. 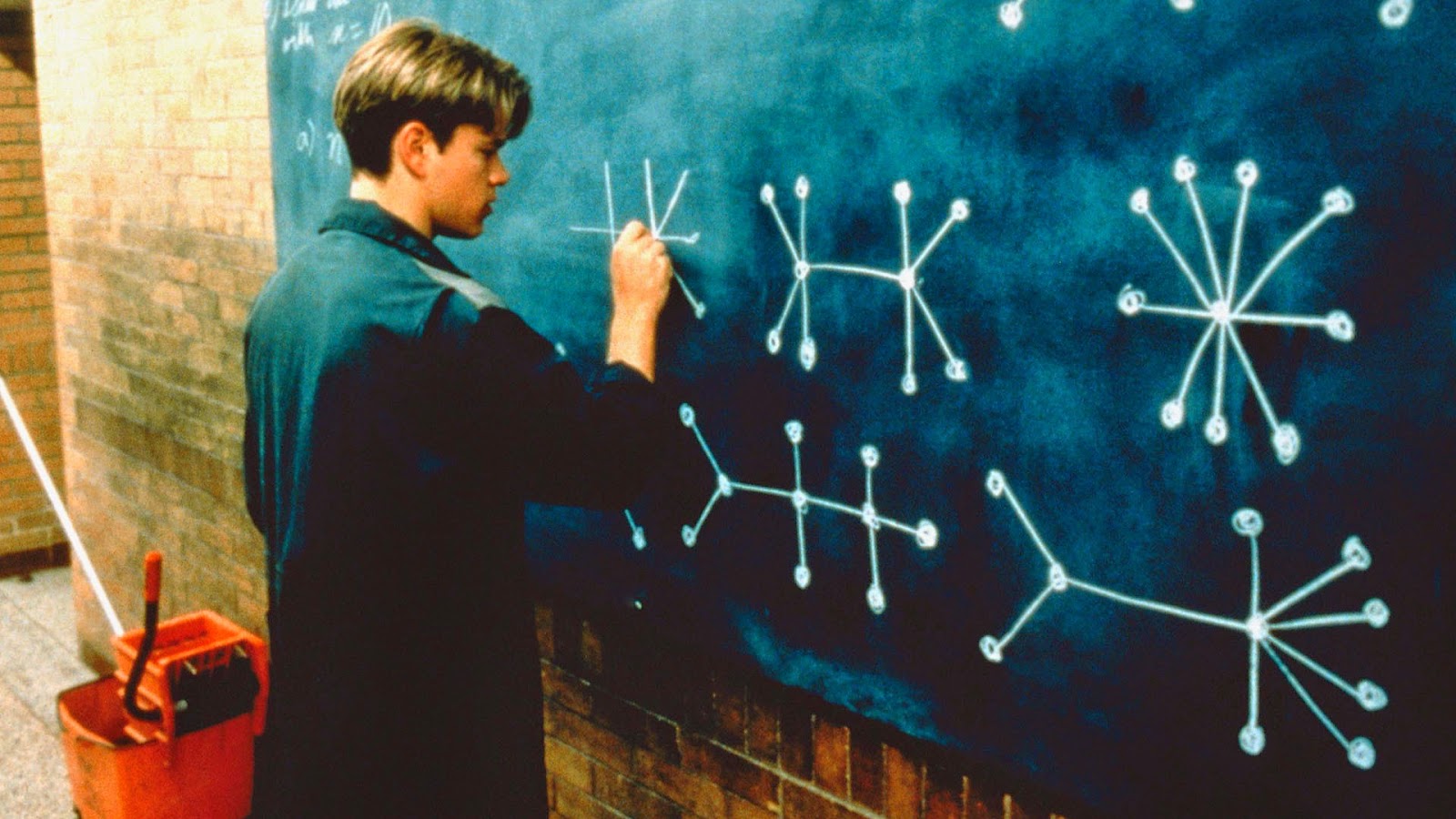 You can be sure that when an experienced movie director like Gus Van Sant selects an establishing shot for the lead character, he does so with considerable care, on the advice of an expert. By showing Will writing a network of dots on a blackboard, Van Sant was right on the button in terms of portraying the kind of thing that professional mathematicians do all the time.

The one bit of license Van Sant took was that the diagram we saw Matt Damon writing was not the solution to a problem that had taken an MIT math professor two years to solve. (Unless MIT math professors are a lot less smart than we are led to believe!) It was a real solution to a real math problem, all right. I am pretty sure it was chosen because it fitted nicely on one blackboard and looked good on the screen. It absolutely conveyed the kind of (dotty) activity that mathematicians do all the time—the kind of (dotty) thing I did in my early post-Ph.D. years when I was working with Prof Jensen’s morasses.

But it’s actually a problem that anyone who has learned how to think mathematically should be able to solve in at most a few hours. Numberphile has an excellent video explaining the problem.

So, New York Times story parent, I hope you reconsider your decision to take your daughter out of school to teach her the way you were taught. The kind of mathematics you were taught was indeed required in times past. But not any more. The world has changed dramatically as far as mathematics is concerned. As with many other aspects of our lives, we have built machines to handle the more routine, procedural stuff, thereby putting a premium on the one thing where humans vastly outperform computers: creative thinking.

Those dot diagrams are all about creative thinking. A computer can understand numbers, and process millions of them faster than a human can write just one. But it cannot make sense of those dot diagrams. Because it does not know what any particular array of dots means! And it has no way to figure it out. (Unless a human tells it.)

Next month I’ll look further into the distinction between old-style procedural mathematics and the 21st-century need for mathematical thinking. In particular, I’ll look at an excellent recent book, Jordan Ellenberg’s How Not to be Wrong.

You might want to check out both.
Posted by Mathematical Association of America at 12:31 PM 9 comments: