Last month, I wrote about my recent experience teaching a three-day mini-course in the Nueva School January electives “Intersession” program. What I left out was a description of the course itself. I ended with the below diagram as a teaser. I said that, when reading in the usual left-right-down reading order, these were the technology tools that I typically turn to when I start to work on solving a new problem.

A number of mathematicians commented on social media that their list would be almost identical to mine. That did not surprise me. My chart simply captures the way today’s pros approach new problems. A number of math teachers expressed puzzlement. That too did not surprise me. The current mathematics curriculum is still rooted in a conception of “doing math” that developed to meet society’s needs in the 19th Century.

Actually, I should point out that the diagram above is not exactly the one I published last month. I have added an icon for a spreadsheet. A mathematician in Austria emailed me to say I should have included it. The two of us had corresponded in the past about the use of spreadsheets in mathematics, both in problem solving and in teaching, and we were (and are) very much on the same page as to their usefulness in a wide variety of circumstances. My excuse for overlooking it the first time round was that it was only the second technological tool I brought into my mathematics arsenal, so far back in my career that I had long ago stopped thinking of it as something new. (The first piece of “new tech” I adopted was the electronic calculator, and that too did not appear in my chart.) I suspect that almost all math teachers, and indeed, pretty well all of society, make frequent use of calculators and spreadsheets, not only in their professional activities but in their social and personal lives as well. Still, the spreadsheet is such a powerful, ubiquitous mathematics tool, I should have included it, and now I have. (Its use definitely figured in the guidance I gave to the Nueva School class.) I have placed it in the position in my list that, on reflection, I find I turn to in order of frequency.

Some of the responses I received from teachers indicated that I need to clarify that, by “solving a mathematical problem”, I mean using mathematics to solve a real-world problem. The problem we worked on at Nueva School was one UPS worked on not long ago: “What is the most efficient way to route packages from place to place?” More on that later. A simpler example in the same vein is when we ask ourselves “Which kind, model, and hardware configuration of mobile phone best meets my needs within my current budget?”—an example where, for most of us, the item’s cost is high enough for us to weigh the (many) options fairly carefully.

This is clearly not the same as “solving a math problem” in a typical math textbook. For example, “What are the roots of the equation x2 + 3x – 5 = 0?” Those kinds of questions are, of course, designed to provide practice in using various specific, sharply focused, mathematics techniques, procedures, formulas, or algorithms.

Those techniques, procedures, etc. are the basic building blocks for using mathematics to solve problems in real life, but they don’t really present much of a problem, in the sense the word is used outside the math class. Indeed, the reason it can be valuable to master those basic techniques, etc. is that being able to use them fluidly means they won’t be a problem (in the sense of an obstacle) that gets in the way of solving what really is a mathematical problem (e.g., which phone to buy). That, of course, is why we call them basic skills. But having mastery of a range of basic skills does not make a person a good problem solver any more than being a master bricklayer makes someone an architect or a construction engineer.

My focus then, is on using math to solve real-world problems. That’s where things are very different from the days when I first learned mathematics. Back in the 1950s and 60s, when I went through the school system, we spent a huge amount of time mastering algorithms and techniques for performing a variety of different kinds of numerical and symbolic calculations, geometric reasoning, and equation solving. We had to. In order to solve any real-world problem, we had to be able to crank the algorithmic and procedural handles.

Not any more. These days, that smartphone in your pocket has access to cost-free cloud resources that can execute any mathematical procedure you need. What’s more, it will do it with a dataset of any real-world size, with total accuracy to whatever degree you demand, and in the majority of cases in a fraction of a second.

To put it another way, all those algorithms, techniques, and procedures I spent years mastering, all the way through to earning my bachelors degree in mathematics, became obsolete within my lifetime, an observation I wrote about in an article in the Huffington Post in January of last year.

So, does that mean all that effort was wasted? Not at all. Discounting the fact that in my case, I was able to make good use of those skills and knowledge for several decades before the march of technology rendered them obsolete, the one thing that I gained as a result of all that procedural learning that is as valuable today as it was back then, was the ability to think mathematically. I wrote about one aspect of that “mathematical thinking” mental ability, number sense, in a simultaneously published follow-up piece to that Huffington Post article.

In today’s world, all the algorithmic, computational, algebraic, geometric, logical, and procedural skills that used to take ten years of effort to master can now be bought for $699. At least, that amount (the price of an iPhone 8, which I chose for illustration) is all it costs to give you access to all those skills. Making effective use of that vast powerhouse of factual knowledge and procedural capacity requires considerable ability. Anyone who mastered mathematics the way I did acquired that ability as an automatic by-product of mastering the basic skills. But what does it take to acquire it in an age when all those new tools are widely available?

The answer, of course (though not everyone involved in the mathematics education system thinks it is obvious, or even true), is that the educational focus has to shift from procedural mastery to understanding. Which is precisely the observation that guided the Common Core initiative in the United States. Yes, I know that the current leadership of the US Department of Education believes that the Common Core is a bad idea, but that is an administration that also believes the future of energy lies in fossil fuels, not renewables, and the highly qualified, career-professional contacts I have in the Department of Education have a very different view.

How do you acquire that high-level skill set? The answer is, the same way people always did: through lots of practice.

But be careful how you interpret that observation. What need to be practiced are the kinds of activities that you would use as a professional—or at least a competent user of mathematics—in the circumstances of the day. In my school days, that meant we had to practice with highly constrained, “toy” problems. But with today’s technologies, we can practice on real-world problems using real-world data.

Almost inevitably, when you do that, you find you frequently need to drop down to suitably chosen “toy problem” variants of your task in order to understand how a particular online tool (say) works and what it can (and cannot) do. But today, the purpose of, say, inverting a few 2x2 or 3x3 matrices is not (as it was in my day) so you can become fluent at doing so, and certainly not because you will actually invert by hand that 100x100 matrix that has just reared its ugly head in your real-world problem. No, you just need to get a good understanding of what it means to invert a matrix, why you might do so, and what problems can arise.

And you know what? That’s rarely a problem. Once you have identified a mathematical technique you need to understand, the chances are high you will find not one but a dozen or more YouTube videos that explain it to you.

These new tools certainly don’t solve the problem for you. [Well, sometimes they may do, but in that case it wasn’t a problem that required the time of a mathematician. Better to move on and put your efforts into a problem that cannot be solved by an app in the Cloud!] All that these fancy new tools have done is change the level at which we humans operate.

At heart, that shift is no different from the level-shift introduced in the 9th Century when traders in and around Baghdad developed techniques for doing routine arithmetic calculations at scale, by performing operations not on specific numbers but on classes of numbers. One of the techniques they developed was called, al-jabr, a term that ended up giving the name we use today to refer to that new kind of calculation procedure: algebra.

Throughout mathematics’ history, mathematicians have calculated and reasoned logically with the basic building blocks of the time. Today’s procedures (that have to be executed) turn into tomorrow’s basic entities (on which you operate). A classic example is differential calculus, where functions are no longer viewed as rules that you execute to yield new numbers from old numbers, but higher-level objects on which you operate to produce new functions from old functions.

So (finally), what exactly did we do in that Nueva School mini-course to illustrate the way today’s pros use math to solve a problem? The problem, remember, was this: Reverse engineer the core algorithm than UPS uses to route packages from origin to destination?

To start the class off—they worked in small teams of three or four—I provided a small amount of information to get them started:
That information, I told the class, was enough to figure out how the routing algorithm worked. [This itself is useful information that I did not have when I first solved the problem, but they had to figure it out by the end of the course, so I was happy to give them additional information.] In solving this problem, they could elicit my help as their “math consultant,” to call on with specific questions when required. But they had to carry out the key steps.

They could, of course, use the various tools in my “modern math tools” chart, and any others they could find. (Since the UPS routing algorithm is an extremely valuable trade secret, they would not find that online, of course.)

Next month, I’ll tell you how they got on. In the meantime, you might like to see how far you can get with it. Happy problem solving! Happy mathematical thinking! 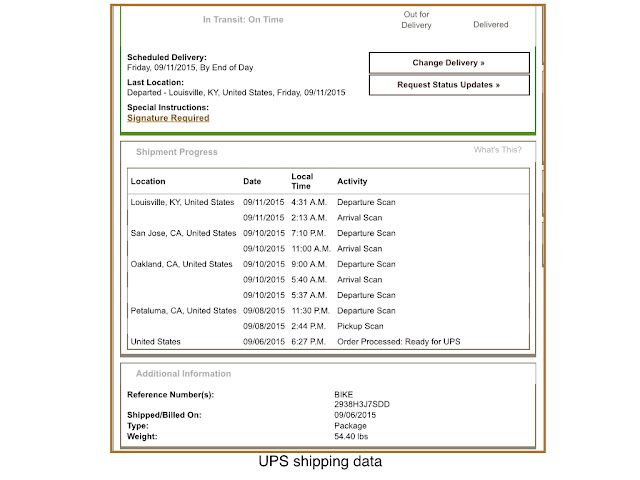 Part 2 will appear next month.

Posted by Mathematical Association of America at 8:00 AM No comments: