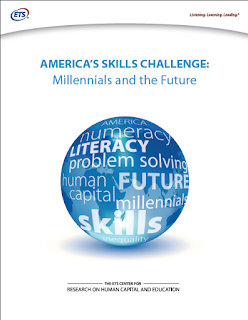 Greetings from 37,000 feet. As I write these words, I am on my way from San Francisco, California, to Boston, Massachusetts, to participate in a two-day workshop at Harvard, sponsored by the OECD (Organisation for Economic Co- operation and Development), to look at what should go into the math tests that will be administered to children around the world for PISA 2021.

PISA, the Programme for International Student Assessment, gets such extensive press coverage each time one of its reports is published, that it really needs no introduction. Americans have grown used to the depressing fact that US school children invariably perform dismally, ranked near the bottom of the international league tables, with countries like Japan and Finland jostling around at the top.

But chances are you have not heard of PIACC – the Programme for the International Assessment of Adult Competencies. The OECD introduced this new program a few years ago to investigate the nation-based adult skillsets that are most significant to national prosperity in a modern society: literacy, numeracy, and problem solving in a technology-rich environment (PS-TRE).

Whereas the PISA surveys focus on specific age-groups of school students, PIAAC studied adults across the entire age range 16 to 65.

The first report based on the PIAAC study was published in fall 2013: OECD Skills Outlook 2013: First Results from the Survey of Adult Skills.

A subsequent OECD report focused on PIACC data for US adults. The report’s title, Time for the U.S. to Reskill, gives the depressing-for-Americans headline that warns you of its contents. The skill levels of American adults compared to those of 21 other participating OECD countries were found to be dismal right across the board. The authors summarized US performance as “weak on literacy, very poor on numeracy,” and slightly below average on PS-TRE.

“Broadly speaking, the weakness affects the entire skills distribution, so that the US has proportionately more people with weak skills than some other countries and fewer people with strong skills,” the report concluded.

I have not read either OECD report. As happened when I never was able to watch the movie Schindler’s List, it is one of those things I feel I ought to read but cannot face the depression it would inevitably lead to. Rather, for airplane reading on my flight from Stanford to Harvard, I took with me a recently released (January 2015) report from the Princeton, NJ-based Educational Testing Service (ETS), titled AMERICA’S SKILLS CHALLENGE: Millennials and the Future.

The ETS report disaggregates the PIAAC US data for millennials—the generation born after 1980, who were 16–34 years of age at the time of the assessment.

The millennial generation has attained more years of schooling than any previous cohort in American history. Moreover, America spends more per student on primary through tertiary education than any other OECD nation. Surely then, this report would not depress me? I would find things to celebrate.

This month’s column is distilled from the notes I made as I read through the ETS report. (These are summarizing notes. I did not bother to quote exactly, or even to use quotation marks when lifting a passage straight from the report. The originals of all the reports cited here are all freely available on the Web, so please go to the source documents to see what was originally written.)

A central message emerging from the ETS report is that, despite all the costly and extensive education, US millennials on average demonstrate relatively weak skills in literacy, numeracy, and problem solving in technology-rich environments, compared to their international peers. Sigh.

And this is not just true for millennials overall, it also holds for our best performing and most educated young adults, for those who are native born, and for those from the highest socioeconomic background. Moreover, the report’s findings indicate a decrease in literacy and numeracy skills for US adults when compared with results from previous adult surveys.

Some of the data highlights:
Even worse for those of us in higher education, this dismal picture holds for those with higher education:
All very depressing. I fear that this state of affairs will continue all the time US education continues to be treated as a political football, with our nation’s children and their teachers treated as pawns while various groups fight political battles, and make decisions, based not on learning research (of which there is now a copious amount, much of it generated in US universities) but on uninformed beliefs and political ideology. [You were surely waiting for me to throw in my two cents worth of opinion. There it is.]

To finish on a high note, we Americans famously like winners. So let’s raise a glass to the nations that came out on top in the rankings (in order, top first):

In their own way, each of these countries seems to be doing education better than we are.

Yet here’s the fascinating thing. I’ve spent time in all of those countries. They each have a lot to offer, and I like them all. I also was born and grew up in the UK, moving to the US as an adult in 1987. I am a lifelong educator. But for all its faults (and its education system is just one of a legion of things America does poorly) I’d rather live where I do now, in the USA, with Italy in second place. But that’s another story. A complicated story. (If you think California is a separate nation, and in many ways it is, then my preference statement needs further parsing.) Doing well on global tests of educational attainment is just one factor that we can use to measure quality of life.
Posted by Mathematical Association of America at 1:40 PM No comments: