Do your kids find learning math hard? There may be an app for that! 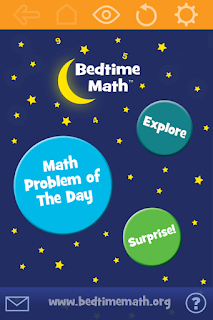 If you are like me, you probably sigh and switch off when you read an article with a title claiming kids’ math scores show significant improvement after using some great new app for a few minutes each day.

In which case, you may have paid little attention when a news article came out in Science magazine recently, reporting a new study showing that after just one year of parents using a bedtime-story-telling app called Bedtime Math with their young children, those kids were three months ahead of fellow students whose parents were using an app to provide non-mathematical stories. In fact, children of math-anxious parents showed even greater improvement, ending up six months ahead.

If you happened to see the article, you likely assumed it was essentially a piece of marketing, where a bogus “study” was carried out to produce the “results” the marketing folks wanted. After all, there are no magic bullets in the math ed world, right?

My reaction was very different. I immediately wanted to know more. The reason being, as I recounted in last month’s column, the same thing had happened a few months earlier with a math learning app I had created, a mobile game called Wuzzit Trouble. (Actually, I should have written “we” there. Paul McCartney may have sung that he had “got by with a little help from my friends,” but the reality was it took a lot of work by all four Beatles to make them a global phenomenon, and in the apps business it usually takes a whole team of highly talented people to create a great product. My team are listed here.) A Stanford classroom study led by Prof Jo Boaler had found significant math learning after just two hours play of Wuzzit Trouble spread over four weeks.

The Bedtime Math study was unlikely to have been a bogus marketing “study”, I felt, since it had been carried out at the University of Chicago, which is a great university. True, as the Science article noted, the study was funded by an entity called the Overdeck Family Foundation, whose chair, Laura Overdeck, a former astrophysics major at Princeton, established the nonprofit Bedtime Math Foundation, which created and supports the app. Some might read that and smell a rat – as some did when they first read of the Stanford Wuzzit Trouble study.

But to my mind such a reaction says more about the reader than the researchers. We are talking about an educational app made and distributed for free by a nonprofit organization. Why would anyone want to fake data? Really!

In fact, even if the app were for sale – say for a mind boggling $4.99 – the idea that seven researchers at a major university would fake a study about a small children’s app is simply not credible. As a number of news articles have made clear, the price for a university researcher faking a scientific study is dismissal from the university and the end of their career. When it does happen, the motivation is invariably massive career prestige and fame, or a huge follow-up research grant (or both). Neither of which are likely to result from an at best encouraging, small scale classroom study of Bedtime Math, Wuzzit Trouble, or any other kids’ app.

If a foundation or a company wanted to run a fake study for marketing purposes, they could simply do it themselves, or else farm it out to an unscrupulous, individual researcher. Such people are to be found, sometimes associated with universities. (Google “intelligent design” or “climate change denial” for examples.)

Certainly, James Stigler, a well known educational psychologist at UCLA, is not skeptical. Science quotes him as saying, "I think it's a fantastic study. But it is just the beginning."

Another respected scholar, Andee Rubin, a mathematician and computer scientist at the nonprofit education R&D company TERC in Cambridge, Mass, has a similar reaction. Science quotes him as observing, "I'm interested in teasing it apart and seeing what makes this effective."

Those are pretty much the same as the reaction I had to Stanford’s Wuzzit Trouble results, which prompted me to draw up the list of possible explanatory factors I published in my last column.

With both the full paper and a cover article available in Science, all I will do here is provide a brief summary of the cover article.

The Chicago team recruited 587 first-graders from 22 schools in the Chicago metropolitan area. The parents of each child were given a tablet computer with which to read to the child at bedtime. 420 families were told to use it to work through word problems related to counting, shapes, arithmetic, fractions, and probability using Bedtime Math. Another 167 families were instructed to use a reading app. With a standardized test, the researchers assessed all the subjects' mathematics performance at the beginning and end of the school year.

As you would expect, use of the reading app made little difference to the children's math performance. In contrast, children who used the math app two or more times per week outpaced peers whose family rarely used it, ending up three months ahead.

Perhaps most important, use of the app brought students whose parents said they were anxious about math up to par with those whose parents were at ease with the subject. Among children whose family rarely used the math app, those with math-phobic parents made only half as much progress as the children of parents comfortable with math.

The researchers make some suggestions as to what may be going on. My own best guess, based on several months reflections on the Stanford and (subsequent) Finnish studies of Wuzzit Trouble, are consistent with what they think. Namely:

We have created a system where learning is walled off from everyday life. Particularly in math. The “math classroom” operates according to its own rules. Even with a truly great teacher – and I have met many – there are many restrictions on what can be done. Not least because of an incessant rhythm of performance testing.

Go into most math classrooms and what you see will most likely bring to mind a room full of clerks in the pre-computer age when companies employed large numbers of numerically-able people to crunch their numbers. (Young people will have to rely on old photographs or depictions in movies.) Which was, of course, what the system was set up to provide.

The classroom certainly does not look remotely like a room full of professional mathematicians at work. The first words that might come to mind if you were to walk into such a room would be “fun”, “engagement”, “argument”, “passion”, “social interaction”.

Nor does it look like the human activity that hundreds of thousands of years of natural selection have inbred into us to maximize learning in the young: play. (Some wise person once said that “play is the work of the child.” I agree.)

And there is something else that evolution hard-wired into is: our love of stories. Effective political speeches are usually laden with stories of individual people, and for very good reason. Because they are powerful.

At which point, it’s probably a good idea to do what we math instructors tell our student to do: look for patterns. Well, what do we see when we look at professional mathematicians at work and kids in their ideal learning activity?

Those are all, I would argue, essential ingredients for good learning. Yet you would have difficulty finding any in many math classrooms.

Indeed, society seems to have gotten into a mindset that these items are distractions that you have to eliminate to achieve good math learning. Even when good teachers do their best to inject some of those valuable features into their classes, they have to operate within a system that disapproves. And everyone knows that, most of all the kids.

No wonder then, that when you have a well designed, engaging app – a game, a puzzle, a family-supporting bedtime story provider, or whatever – you will likely get good results. Because apps, if properly designed, create their own environment.

Though I labored long and hard to create Wuzzit Trouble, and I am sure Laura Overdeck worked equally hard on Bedtime Math, all to good effect for sure, my strong suspicion is our apps work as well as they do in such a short time primarily because of what they are not. Namely they are not the typical school classroom approach to mathematics education.

How else can you explain dramatic results after a few hours engaging with an app, other than it unlocking what had hitherto been shackled by the chains of an Industrial Revolution conception of mathematics learning? Learning something that is genuinely new takes time and a lot of effort. Freeing something that is already there – if only in embryonic form – is much quicker. If so, then this means that our received wisdom that it takes a lot of hard work, repetitive practice, frustration, tears, and pathological levels of anxiety to achieve competency in mathematics may simply be very strong evidence that our approach sucks.
Posted by Mathematical Association of America at 8:30 AM No comments: