The First Arithmetic Textbook in the Western World 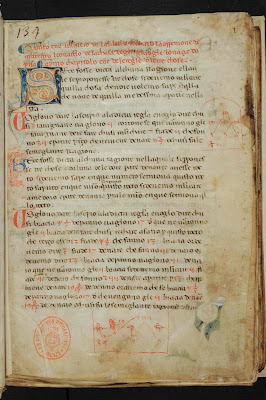 Image courtesy of the Riccardiana Library in Florence.

The image above shows the initial page of the first arithmetic textbook in the western world. Written (in vernacular Italian) around 1290 CE by an unknown author in Umbria, it begins with the declaration: “This is the book of abacus according to the opinion of master Leonardo of the house of sons of Bonacie from Pisa.”

Wait a minute? Doesn’t everyone know that Leonardo of Pisa’s Liber abbaci was the first arithmetic textbook? Isn’t that the story I tell in my recent book The Man of Numbers: Fibonacci’s Arithmetic Revolution?

Not quite. Liber abbaci, completed in 1202, was the first comprehensive description of modern arithmetic (using the Hindu-Arabic numerals, decimal place-value representations of numbers, and the basic arithmetic algorithms we all learn in school) in the western world. But it was not really a textbook. Its mammoth length and the fact that it was written in Latin made it accessible only to scholars.

Smart man that he was, Leonardo recognized that, and wrote a shorter, simpler book, aimed at merchants and businessmen. Unfortunately, though copies of most of Leonardo’s works survived (no original Leonardo manuscript did), there are no known copies of his smaller book for merchants. We know he wrote it because he refers to it in Liber abbaci, calling it his liber minoris guise (“book in a smaller manner”), and because other authors referred to it. Those other references suggest that it most likely comprised material from the first ten chapters of Liber abbaci together with parts of one of Leonardo’s other books, De Practica Geometriae, but exactly what its contents were, no one knew.

Until 2003, that is, when mathematics historian Rafaella Franci, who directs the Center for the Study of Medieval Mathematics at the University of Siena, published the results of a remarkable study of a manuscript she came across in the Biblioteca Riccardiana in Florence. The manuscript is anonymous, and occupies pages 1 to 178 of the library’s Codex 2404. The work itself is undated, but dates in some of the problems place its writing at around 1290, and the vernacular language used places it in the Umbria region.

The book (known as Livero de l’abbecho — “Book of calculation” — from the anonymous author’s introduction) is divided into thirty-one short chapters. It is not an original work. Roughly three-quarters of the problems are faithful translations into the vernacular of problems in Liber Abbaci. Of particular note to a modern reader, it includes Fibonacci’s famous rabbits problem, though recast in terms of pigeons. The book was clearly written for a wide audience, since the author began each problem type with simpler problems than those in Liber abbaci.

Could this be a copy of Leonardo’s lost “book for merchants”? Or did the unknown author get the material from Liber abbaci? Since the writer gives no indication of having any particular mathematical skill, it seemed unlikely he could have carried out the difficult task of simplifying the sophisticated descriptions found in Liber abbaci. Moreover, his text included material on geometry that is hardly mentioned in Liber abbaci. It could, however, have come from De Practica Geometriae.

Even more intriguing, the Umbrian’s book had three chapters on calculating interest and depreciation, a topic not covered in Liber abbaci at all. This material was obviously included to make the treatise more useful to merchant readers, but where did it come from?

So here we have a manuscript written around 1290 that provides a much simplified account of the novel, and for the times highly sophisticated mathematics in two of Leonardo’s long, dense scholarly texts, coupled with some novel material on financial matters. The author of the manuscript gives no indication of having any particular mathematical ability, so he must have simply copied it from a single source. It is, in short, a medieval equivalent of a photocopy. But a photocopy of what?

There was only one mathematician at that time who had the ability to write the photocopy’s source: Leonardo. Which means that the manuscript in the Riccardiana Library is not only the oldest known textbook on practical arithmetic in the western world, it must in fact be a copy of Leonardo’s lost “book for merchants. A conclusion that has been confirmed by other studies since Franci reported her findings.

For more details, see my recent book The Man of Numbers and the companion e-book Leonardo and Steve, (where I compare Leonardo with Steve Jobs, a man of our age very much in the news of late).